You are here: Home / Katie earns promotion to Prem Division 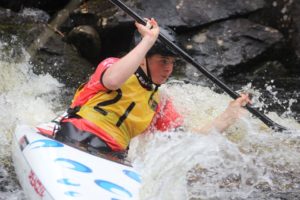 5th June 2019
Katie Shattock, a 15yr old member of Taunton Canoe Club, is currently the only women’s premier slalom kayak paddler in the south west. After a week of highs and lows in Nottingham and North Wales during her half term holiday she pulled off two consecutive wins to earn promotion to the highest division.
The week began with a competition at Nottingham where she proved she was ready to compete at the highest level but then in training on the River Tryweryn in North Wales she broke the tail of her boat. Her aspirations to reach Prem before the summer could have faltered. Incredibly, TJ Composites were able to repair her boat in just three days and so once again she was ready to race at Chapel Falls Slalom, nr Bala. 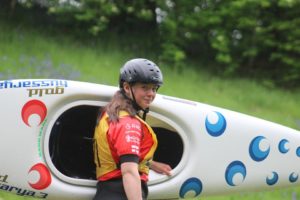 Despite the interrupted training week, Katie’s week culminated in winning both races, gaining maximum promotion points. Enough to earn a place in the premier division where she is now already ranked 37th in the UK for all ages.
Katie’s goals quickly switched from wanting to be in Prem division to wanting to be in the top thirty by the end of the season. And she is well on the way to achieving the next goal. Within her southern coaching group, she inspires other girls to persevere and overcome adversity with her positive and resilient attitude to her sport. Katie is leading the way for more south west women to reach Prem, particularly from Wyedean Canoe Club. 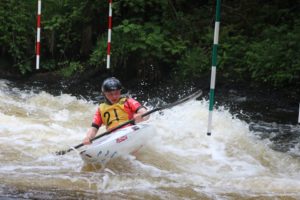 She is now looking forward to racing against international paddlers in Slovenia, Germany and Austria later in the month. Her first UK premier race is set for September.