24th October – Stone Div 3/4 – Richard, desperate to find just 9 points for promotion, trekked up to Stone Slalom. It all paid off when he came 4th with two clear runs and is now in Div 2 K1 ready for the new season.

10th/11th October – Llandysul Slalom Div 1/2 – Very respectable results were achieved for TCC. Harvey and Ben came 39th and 40th respectively out of 74 competitors in Div1 K1. There were so many paddlers competing, practise runs had to start as soon as the sun came up (7.15am).

3rd/4th October – Darley Abbey Slalom Div 2/3 – TCC scooped a trunk load of trophies. Special mention to Sadie – 1st in C1 and K1 on Saturday followed by 1st in K1 and 2nd C1 on Sunday. Also there was a first for Tom in C1, a third for Richard in K1, two firsts for Clive/Leonie in C2, a second for Ben/Katie in C2 and good results for Lucy and Katie in K1 Div 3. Only a couple of competitions left in the season but just a few points needed for Sadie, Tom, Kyle and Richard to gain promotions. Come on TCC!

12th/13th August – Cardington Interclub Championships 2015 – TCC was presented with a shield for the highest scoring team without a Div 1 or Prem paddler (as at the cut off date). We came 15th out of 23 teams from around UK. The team runs were a lot of fun and a new experience for the younger paddlers.

29th/30th August – Grandtully Div 1 – Harvey stormed into his first Div1 competitions taking away 896 points and his dad with just 383.

5th place – Ben Div2 K1M (only half a second behind Harvey)

Well done to Kyle on being promoted into Div2 on Saturday by beating 40% of Div 2 men.That meant he was actually paddling in the Div2 competition on Sunday. Good results from everyone. Well done Sadie for ‘paddling up’ in a Div 2 competition. Likewise, Tom in C1. Finally, Harvey should be proud of coming 7th out of 64 Div2 men on Sunday.

Weekend Slalom Highlights : Kyle won div 3 k1m both days! Sadie managed to stay in her boat, Tom didn’t! After a good result Saturday, Harv managed to get two 50’s in k1 on Sunday. Good competition between Kyle and Tom in C1. Good weekend, all in all, although it rained from 0600 until 1800 on Saturday.

Amazing weekend with Taunton CC submitting 42 entries over the 2 days. As always, Frome Canoe Club organised a great event and even supplied good weather for the two days.

There were so many success stories from our paddlers. Here are a few:

There was fierce C2 competition on Sunday with TCC submitting 8 of the 16 partnerships.

Well done to Lucy on her 2nd place and promotion to Div3 K1W. Also congratulations to Katy on being the fastest J12 K1W. The next Div3/4 slalom is at Langham Farm, Frome on 6th and 7th June. It will be an ideal opportunity to try slalom on some moving water.

Despite the long drive to Washburn, Halifax, our youth paddlers were raring to get on the water. However, some of those faces did look a little more concerned once the dam water was released. It was a challenging course, fit for the Div 2 slalom (some said fit for a Div1 event). There were varying degrees of success with some swimmers taking quite a bashing on the fast flowing section. A good experience. 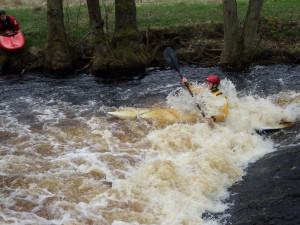 “Among the winners, Harvey Merrifield from Taunton CC, aged 12 years, beat all the adult competitors and his brother Thomas, aged 10 years, came fourth in a field of eleven. The brothers must have a bright future and are an example to us all!

In the Open C1 event, where people kneel and paddle with a single paddle, young Harvey narrowly beat his club mate Kyle Spooner from Taunton, to gain a second trophy.”