Weil’s Disease is a bacterial infection carried in rat’s urine which contaminates water and wet river banks. The bacterium does not survive for long in dry conditions. It can occur in any water, although the risk of infection is greater in stagnant or slow moving water. Weil’s Disease is rare, but it can be a serious illness requiring hospital treatment. It is caught by absorbing the bacteria through the skin and mucous membranes of the mouth and eyes, or any cuts in the skin. If within 3 -19 days after canoeing you feel ill with a temperature, influenza-like illness and/or joint and muscle pain and possibly jaundice, you should see your doctor immediately and tell him/her you have been taking part in watersports and where you have been paddling.

White water, rapids and adrenalin. It was all happening last weekend in the heart of Exmoor. 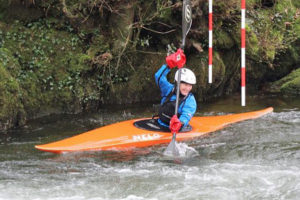 The third annual Canoe Slalom competition was held on Sunday 12 March on the River Barle at Dulverton. This town is a canoeing honey pot for lovers of moderate white water, with groups coming from all over the south of England and South Wales in the winter in pursuit of excitement and to enjoy the beauty of the valley.

On Saturday the course was open for practice and by lunchtime there had been nine swimmers in the chilly river. No injuries though, as the rescue crews were quick and efficient. In the afternoon there was a fun team event, where three paddlers tackle the course together. There were time handicaps for the strongest teams, so competition was fierce, though friendly! ‘Rag Tag and Bobtail’ won the event by just one second from KDS, with Doug/Martin/Kyle not far behind. A total of thirteen teams competed.

Nearly eighty individual entries to the competition came from as far away as Salisbury and Monmouth, with ages ranging from 10 years to 78 years. Bideford Canoe Club and Taunton Canoe Club jointly organised the event.  The aim was to awaken more local interest in Slalom, a sport in which Great Britain won gold and silver medals at the 2016 Olympics.

Canoe/kayak slalom is a time trial competition, where competitors negotiate ‘gates’, which are coloured poles suspended above the water. This competition had twenty two gates and was aimed at people relatively new to slalom. The stretch of water, locally known as the ‘Camel’s Hump’, is fast and channelled with rocks and eddies, making it a challenging experience for relative beginners. Course designer Doug Smith had set the course to make use of its natural features, with five of the gates taken upstream, using eddies  to help people turn into them.

Event Organisers from Taunton Canoe Club, Leonie and Clive Merrifield, got the two days running smoothly, using two way radios and computer programmes to collate results. Leonie said, ‘This was our third and biggest slalom competition on this excellent site and we are indebted to the enthusiasm and efforts of all our club members and friends in making it happen. The pay back has been seeing the fantastic excitement among young people in achieving more than they thought possible’. 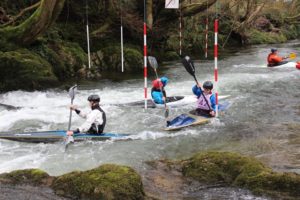 Among the winners, Harvey Merrifield from Taunton CC, aged 15 years, beat all the adult competitors in the Open K1 (kayak single)competition and his brother Thomas, aged 13 years, came seventh in a strong field of fifteen. Course designer Doug Smith from Bideford was a close second to Harvey with Ben Shattock of Taunton CC in third.

The brothers went on to beat their dad and his mate in the C2 doubles, where they kneel in the boat and use single paddles. The brothers must have a bright future and are an example to us all!

In the Ladies Open K1 event, Lena Kraus of Fowey came first, followed by Molly Knight of Wyedean CC with Katie Shattock of Taunton in third.

In K1 mens Division 3, another young talent emerged in Felix Newey from Wyedean CC, aged 13, winning the competition in a field of thirteen. Second place was Jesse Davies from Stroud with Nathan Mower from Bideford in third.

In the Open C1 event, where people kneel and paddle with a single paddle, young Harvey beat his younger brother Tom, with club mate Kyle Spooner from Taunton in third. Some of the prizes were donated by Reed Chillcheater of Braunton.

For details of how to get afloat in this exciting sport, contact http://www.bidefordcanoeclub.co.uk/ or https://www.britishcanoeing.org.uk/