You are here: Home / Whitewater

Pete Collins River Barle Tour November 2019 – It was a good turnout for the Barle Tour. We raised £80 for the Pete Collins Trust. River level was surprisingly good considering the flood levels of nearest rivers such as Exe, Tone and Dart. Photos:

12►
River Teign Nov 2015 – It was a good introduction to moving water for a few and the first trip down the River Teign from A382 bridge to Steps Bridge (12km) for some more experienced members. Thanks to Jeff for leading the group.
[Show slideshow]

Liffey Descent 2015 – Dave and Quentin completed the K2 race in 2hrs25mins. Their race was full of mishaps in true Liffey Descent style. Here’s a picture of the first weir at Straffan. 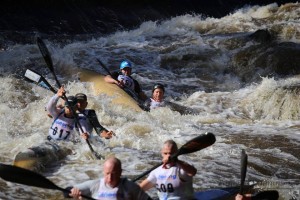 19th September 2015 – Intro to Whitewater on River Wye (Kerne Bridge to Symonds Yat) Justin and Jeff organised a very successful intro to white water trip. It was a beautiful day with beautiful scenery. The paddling progressed from some simple break in and outs to a long play at the rapids at Symonds Yat.

23rd and 24th July 2015 – A few pictures from Tryweryn. 3 young members were lucky enough to paddle at the White Water Centre with Llandysul paddlers. The white water practice really paid off in their slalom results on the following two days. See the slalom report for more details and photos.
[Show slideshow]

Thanks once again to Polly’s Pics for brightening our website.

The Rivers Etive and Roy in Scotland, March 2007

A white knuckled ride in Limerick and Kerry, Southern Ireland 2006

The River Dart October 2006 How early a start in the morning???

Rivers Dart and Tavey November 2005 Followed by a visit to Plymouth A&E….

River Exe Trip, May 2004 A pleasant paddle with some whitewater playing